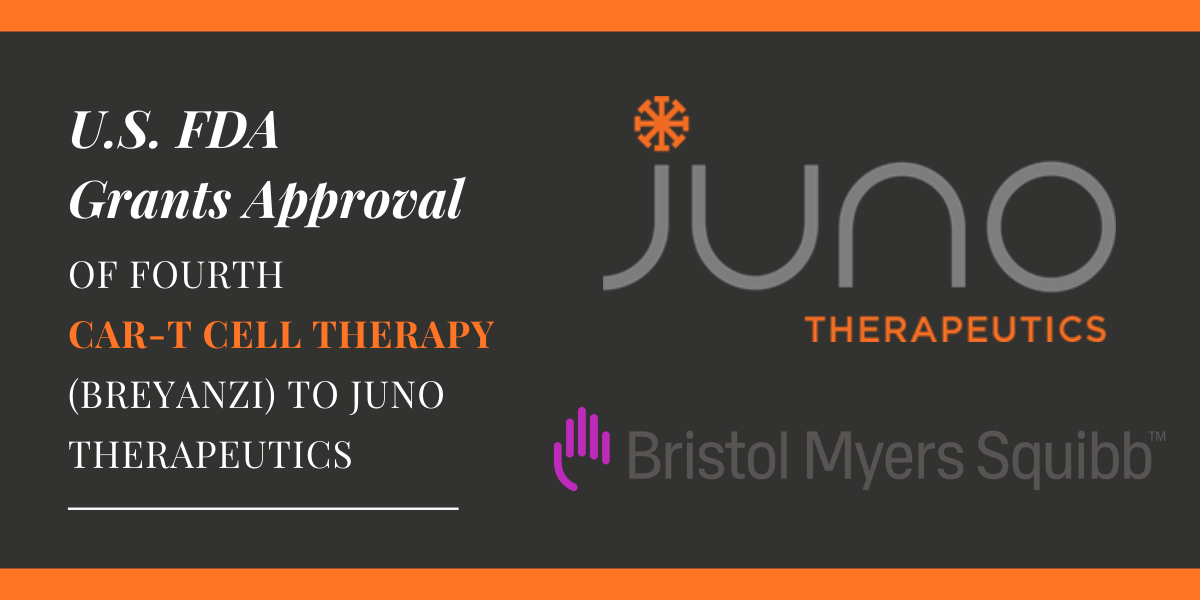 On February 5, 2021, the U.S. FDA granted approval of Breyanzi (lisocabtagene maraleucel) to Juno Therapeutics, a Bristol-Myers Squibb Company. Breyanzi is a chimeric antigen receptor (CAR) T cell therapy approved for the treatment of adults with relapsed or refractory large-B-cell lymphoma who have not responded to, or who have relapsed after, at least two other types of systemic treatment.

CAR-T cell therapy is a remarkably promising treatment for cancer patients. It is a type of immunotherapy where doctors collect immune cells, modify them in a laboratory, and provide them the power to easily recognize and kill cancer cells.

Breyanzi is the U.S. FDA’s fourth approval of a CAR-T cell therapy, which now include:

It is also the first regenerative medicine therapy with RMAT designation to be licensed by the FDA.

The earliest CAR-T approvals, Kymriah and Yescarta, have been commercially available since 2017 and 2018, respectively. They’ve been infused into nearly a half million patients worldwide. In July 2020, the U.S. FDA approved a third CAR-T cell therapy, Kite Pharma’s brexucabtagene autoleucel (sold as Tecartus). Breyanzi now joins the list to become the fourth CAR-T approval within the U.S.

As described by Peter Marks, M.D., Ph.D., director of the FDA’s Center for Biologics Evaluation and Research:

“[This] approval represents another milestone in the rapidly progressing field of gene therapy by providing an additional treatment option for adults with certain types of cancer affecting the blood, bone marrow, and lymph nodes. Gene and cell therapies have evolved from promising concepts to practical cancer treatment regimens.”

Because Breyanzi is an autologous (patient-derived) gene-edited cell therapy, each dose is created using a patient’s own T-cells, a type of immune cell, to help fight the lymphoma.

T-cells form the backbone of CAR-T cell therapy. T-cells are the workhorses of our immune system and play a key role in directing the immune response and killing cells infected by pathogens. In CAR-T cell therapy, blood is drawn from the patient and the T-cells are separated out. These cells are genetically modified to include a gene that facilitates the targeting and killing of the lymphoma cells, specifically. Once modified, the cells are then infused back into the patient.

The safety and efficacy of Breyanzi were evaluated in a multicenter clinical trial of more than 250 adults with refractory or relapsed large B-cell lymphoma. The complete remission rate after treatment with Breyanzi was 54%.

Side Effects of Breyanzi

According to the U.S. FDA:

Treatment with Breyanzi has the potential to cause severe side effects. The labeling carries a boxed warning for cytokine release syndrome (CRS), which is a systemic response to the activation and proliferation of CAR T cells. It can cause high fever and flu-like symptoms and neurologic toxicities. Both CRS and neurological events can be life-threatening.

Other side effects include hypersensitivity reactions, serious infections, low blood cell counts and a weakened immune system. Side effects generally appear within the first one to two weeks following treatment, but some side effects may occur later.

Because of the risk of CRS and neurologic toxicities, Breyanzi is being approved with a risk evaluation and mitigation strategy (REMS) which includes elements to assure safe use (ETASU). The FDA is requiring, among other things, that healthcare facilities that dispense Breyanzi be specially certified. As part of that certification, staff involved in the prescribing, dispensing or administering of Breyanzi are required to be trained to recognize and manage the risks of CRS and neurologic toxicities.

To further evaluate the long-term safety, the FDA is requiring the manufacturer to conduct a post-marketing observational study involving patients treated with Breyanzi.