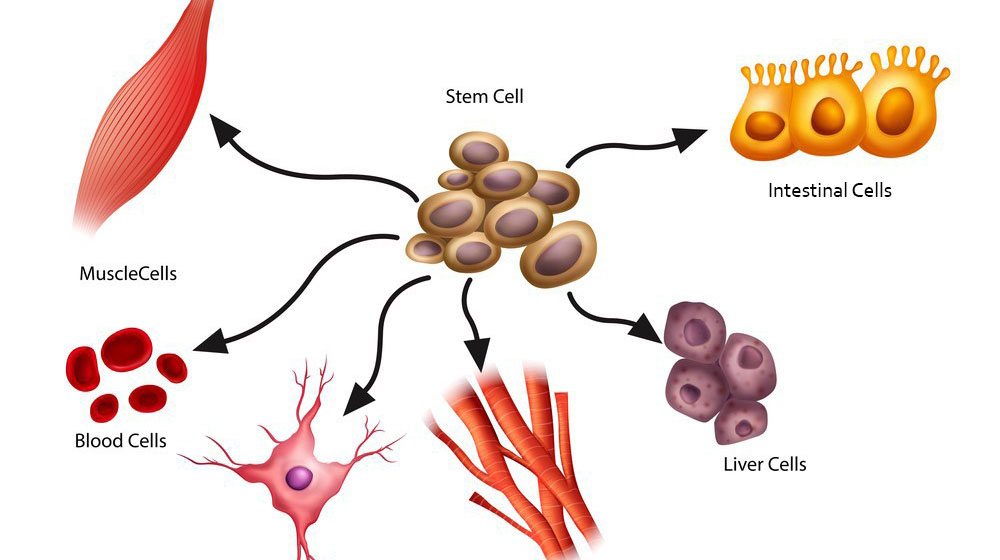 Stem cells can multiply (self-renew) and differentiate into every cell within the human body, giving them enormous potential for use in regenerative medicine.

In a developing embryo, stem cells can differentiate into all of the specialized embryonic tissues. In adult humans, stem and progenitor cells act as a repair system for the body, replenishing specialized cells.

Stem cell research has been going on for over 50 years because stem cells have a unique ability to divide and replicate repeatedly. In addition, their unspecialized nature allows them to become a wide variety of tissue types, which gives them enormous potential for use as living cell therapies.

What Types of Stem Cells Exist?

Originally, all stem cells were classified as either adult stem cells or embryonic stem cells (ESCs). However, a diverse range of stem cell types has since been identified. When iPS cells were discovered in 2006, the research community had a new stem cell type that possessed most of the characteristics of ESCs without the controversy.

Stem Cells Throughout the Human Lifecycle

To make things simple, apply these definitions to classify stem cells by when they are collected during the human lifecycle:

When assessing the functional potential of stem cells, use the following definitions: How Are Stem Cells Being Used in Medicine?

Today, most clinics that offer stem cell treatments administer mesenchymal stem cells (MSCs), which they source from fat tissue or bone marrow. Mesenchymal stem cells are a type of multipotent stem cell that is being explored for use in the orthopedic repair, pain management, arthritis, asthma, and many other applications. MSCs tend to exert effects on other cells and tissues within the human body, which is called “paracrine signaling.”

Although risks will exist whenever cell therapies are administered to humans, a large body of scientific evidence suggests that MSCs can be safe for patient use when properly administered and monitored. There is an additional layer of safety that occurs when cells are multipotent (limited in their differentiation capacity). Often, it is safer for them to be self-derived (“autologous”), rather than from someone else (“allogeneic”).

Another stem cell type that is commonly used is the hematopoietic stem cell (HSC). HSC transplantation has been used for decades as a means of rebuilding the immune system after a patient undergoes radiation or chemotherapy.

What are the Risks of Stem Cells?

One of the risks of totipotent stem cells (embryonic stem cells and iPS cells) is that they have the potential to produce uncontrolled proliferation. The biggest concern surrounding the clinical application of these cells is their tendency to form tumors. Pluripotent and multipotent stem cells have a lower risk of producing tumor formation, but can potentially create growth of the wrong tissue type for a given location within the human body. Additionally, iPS cells are artificially manipulated in a laboratory process, so there is the possibility that the cells can act in unexpected ways.

Because many of these risks can be mitigated and monitored, stem cells are currently being investigated in hundreds of clinical trials worldwide. The majority of these clinical trials involve the use of mesenchymal stem cells (MSCs) and hematopoietic stem cells (HSCs). Approximately three-quarters of these stem cell trials worldwide are registered at ClinicalTrials.gov. You can screen that public database to search for trials by condition, disease, location, or sponsor. Additional trials can be found on a country-by-country basis.

If you need this information on the go, download your free PDF Fact Sheet below.