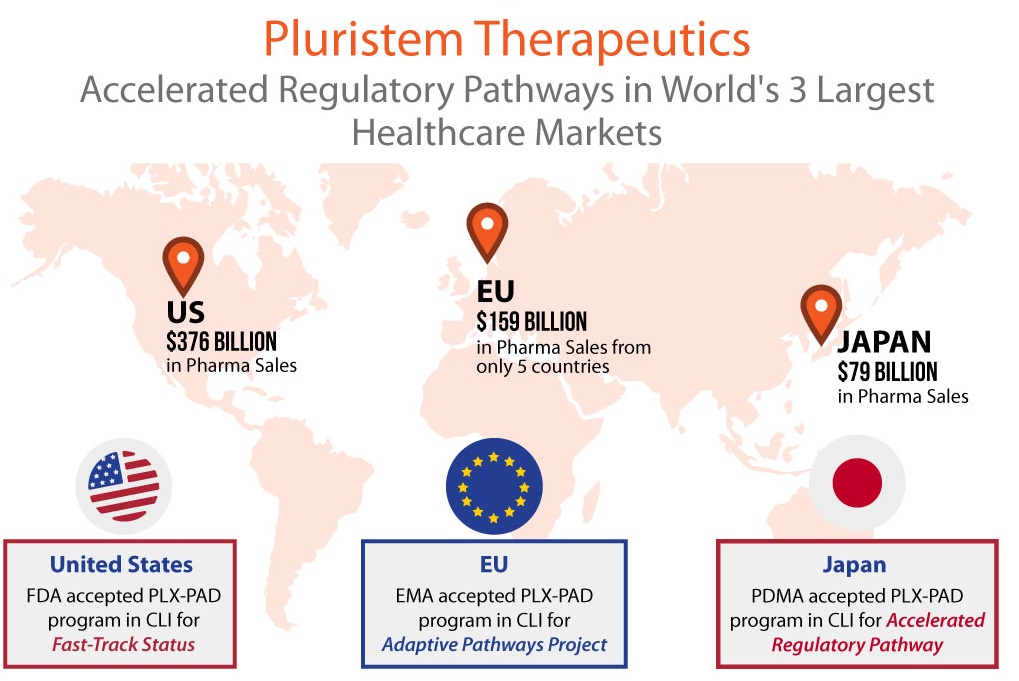 Cell therapy was recently described as “One of the most promising new fields of science and medicine,” by FDA Commissioner Scott Gottlieb. He went on to state that cell therapy and regenerative medicine “…hold significant promise for transformative and potentially curative treatments for some of humanity’s most troubling and intractable maladies.” In the FDA statement issued August 28th, Gottlieb also revealed that the U.S. regulator is looking improve upon its approval process for cell therapies.

In granting Pluristem Therapeutics (NASDAQ:PSTI) a Fast Track Designation for its PLX-PAD cell product in the treatment of critical limb ischemia (CLI), the FDA is showing that it is serious about supporting the advancement of regenerative medicine. Currently, a pivotal Phase III study of PLX-PAD cells for the treatment of CLI is underway in the U.S. and Europe.

Pluristem has become the first cell therapy company, and the first company in medicine, to achieve approval from regulators for accelerated pathways in all three of the top healthcare markets – U.S., Europe and Japan. According to IMS Health, in 2014 the U.S. was the largest market in the world for pharmaceuticals with $376 billion in sales. Collectively, pharma spending by just five European countries brought the EU into second place at $159 billion in sales, followed by Japan in third with $79 billion in sales. Regulators in each of these markets know the potential of cell therapy not only to treat, but to treat in a more cost-efficient way.

In addition to Fast Track Designation in the U.S., the PLX-PAD program in CLI was accepted by the European Medicines Agency (EMA) into its Adaptive Pathways Project. Pluristem’s program there has the potential of Conditional Marketing Approval (CMA) in the CLI indication after an interim analysis of data from its ongoing Phase III study. The interim analysis will look at efficacy and safety data from the first 125 of the total 246 patients planned for the study.

Pluristem’s PLX-PAD cell program in CLI has also been accepted by Japan’s Pharmaceuticals and Medical Devices Agency (PDMA) into its accelerated regulatory pathway for regenerative therapies. The PDMA has cleared Pluristem to be eligible for early conditional marketing approval for PLX-PAD cells in the treatment of CLI after a single positive 75 patient study. Pluristem plans to pursue this third market in conjunction with Sosei, a Japanese healthcare company with which Pluristem has signed a binding term sheet for a joint venture develop and commercialize PLX-PAD for CLI in Japan.

Each of the three regulatory bodies is granting favorable, accelerated approval processes in order to help bring the promise of innovative therapies to the populations that need them. The consensus among the major regulatory agencies appears to be that Pluristem’s PLX-PAD cells are perhaps the most promising cell product advancing through the regulatory process.