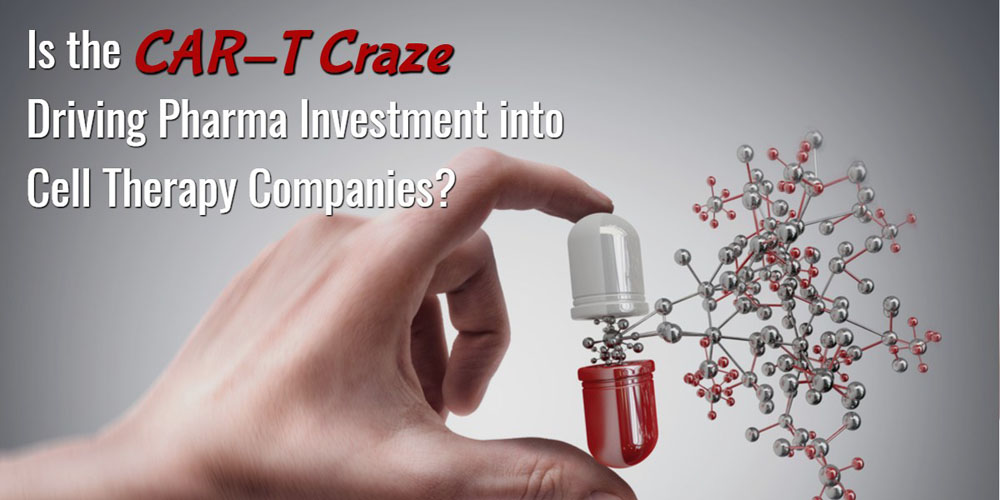 However, one of the most telling trends within the industry is a growing interest among “big pharma” in cell therapy companies.

At its core, pharmaceutical company investment into CAR-T cell therapies is a way to diversify product development pipelines.

At first, the trend was subtle, but the tide has swelled as CAR-T therapies have reached the marketplace and created a craze for promising CAR-T product candidates.

There have also been more than a dozen CAR-T deals between pharmaceutical companies and academic institutions, with the best known being the partnership between Novartis and the University of Pennsylvania (UPenn). In August 2017, the U.S. FDA announced that Kymriah™ would be the first CAR-T cell therapy to be approved in the U.S., an accomplishment that resulted from a 5-year collaboration between UPenn and Novartis.

However, this deal-making isn’t limited to CAR-T cell therapy deals. A full review of “big pharma” investment into cell therapy companies is explored below.

Key investments by the pharmaceutical sector into cell therapy companies are highlighted below:

Much of this partnering activity has been supported by accelerated regulatory pathways that have been passed in major healthcare markets worldwide, including the U.S., Japan, and South Korea. In Japan, the government passed the “Act on the Safety on Regenerative Medicine” and making revisions to the “Pharmaceutical and Medical device Act” in late 2014, giving a major boost to cell therapy development within Asia. Additionally, the EU has a program for product acceleration – the Adaptive Pathways.