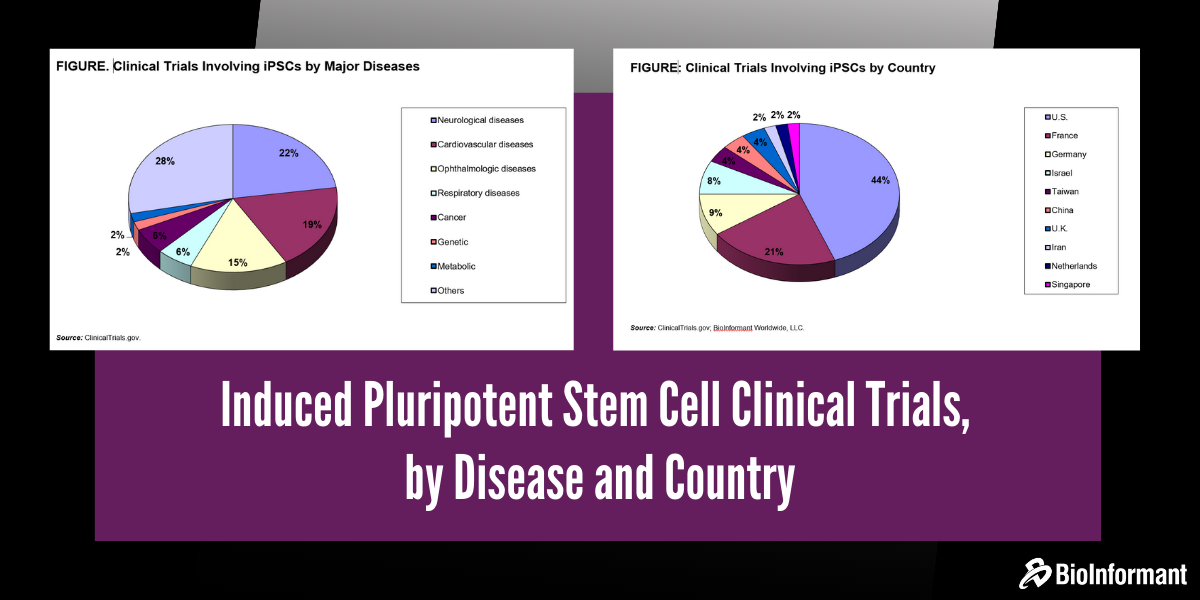 A number of induced pluripotent stem cell (iPSC) derived disease models have resulted in the discovery of new drugs that have been tested in iPSC-derived cells for efficacy and potential toxicities. Genome editing technologies have also added a new dimension to to the development of personalized medicine using iPSCs. In some cases, iPSC-derived cell types are being explored as novel cell therapeutics.

As of today, 53 clinical trials are in progress for various disease indications using iPSCs. Neurological diseases have attracted a lot of attention, representing 23% of the ongoing clinical trials. Clinical trials for the treatment of cardiovascular diseases account for 19%.

The third largest group of diseases using iPSCs in clinical trials is ophthalmologic diseases, accounting for nearly 15%. The other disease categories include respiratory, cancer, genetic, metabolic and other applications.

In addition to all clinical trials carried out to date, preclinical studies are being conducted for many other diseases. For the nascent 14-year-old field of iPSCs, this number of clinical trials is an encouraging sign of growth. Advantages and utilization of the iPSC technology within drug discovery and regenerative medicine are obvious and the technology is now in use in more than a dozen countries. The first government to support the clinical application of iPSC-based regenerative therapies was the Japanese government. As such, it is not a surprise that the world’s first iPSC-based clinical study started in Japan.

Today, nearly 43% of the clinical trials involving iPSCs are conducted in the United States, because of relatively large funding provided by the U.S. National Institutes of Health (NIH) and California Institute for Regenerative Medicine (CIRM).

The U.S. NIH provided funding of more than $32 million in 2019 for iPSC trials conducted in different parts of the country. The following figure shows the percentage share of clinical trials by country. The majority of the iPSC trials in the U.S. are focused on the screening of drug candidates using iPSC-derived cardiomyocytes, neuronal cells and retinal pigmented epithelial cells. Several drug candidates using iPSCs for screening are in clinical trials in the U.S., France, Germany, Israel, Taiwan and China. Currently, there are studies underway involving iPSC-derived therapeutics for the treatment of cardiovascular, neurological and metabolic disorders, as well as the repair of damaged cartilage, spinal cord, motor neurons and eye tissue resulting from genetic causes or injury. While Japan is conducting a large amount of iPSC-research in human patients, it is using the format of physician lead studies.