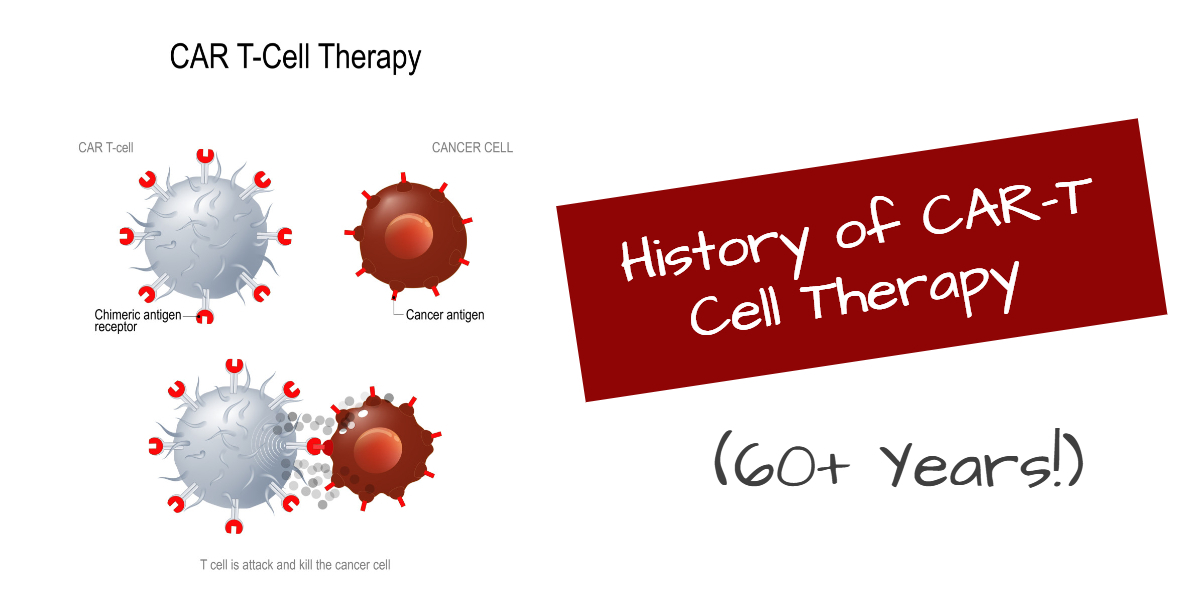 As early as 1900s, researchers were becoming aware that T cells could easily search, recognize and kill cancer cells. To do this, the cells need a “guide” to direct them to the tumors, and thus, antibodies emerged as a valuable scientific and medical tool.

Antibodies are proteins used by the immune system to neutralize pathogens. Notably, they can search for and attack “foreign bodies” within your body, such as bacteria, virus or even cancer cells. In 1975, the first monoclonal antibodies (mAbs) were developed. Importantly, these mAbs could be mass produced within a laboratory, giving them enormous commercial potential.

The first mAb to be used as a cancer therapeutic was developed in 1997. This therapeutic mAb Rituximab (Rituxan) was soon approved to treat certain types of lymphoma. This antibody binds to the surface of lymphoma and causes the death of tumor cells. Rituximab paved the way for several other targeted cancer therapies.

In 1987, the first chimeric antigen receptor (CAR) was created. It was an engineered receptor that does not exist in nature. The DNA coding for this receptor was implanted in T cells to create CAR-T cells. CAR-T thus came to possess a fragment of the antibody that allows it to home in on tumors.

In late 1990s, methods were developed to multiply CAR-T cells in large numbers in the laboratory and infuse them so they can act as reliable killers of cancer cells.

In 2011, the first promising results showing complete remission from patients with chronic lymphocytic leukemia were reported. Some of these patients are still alive and disease-free to this day. Around the same time promising results were also reported from children and adults with B-cell acute lymphoblastic leukemia (ALL). Nearly about 90% of the ALL patients showed a complete and rapid response.

At the same time, the toxicities from the therapy were also life-threatening, particularly due to cytokine release syndrome. However, researchers have developed suitable treatments to mitigate this problem without reducing the ability of CAR-T cells to destroy the tumor cells.

In 2017, cancer patients witnessed the historic victory of cancer researchers when on August 30, 2017, Tisagenlecleucel (Kymriah) was approved by U.S. FDA for the treatment of children and young adults with acute lymphoblastic leukemia (ALL).

Soon after, on October 18, 2017, FDA granted approval for Axicabtagene ciloleucel (Yescarta) for treating patients with relapsed/refractory diffuse large B-cell lymphoma (r/rDLBCL) and other rare large B-cell lymphomas. Both these projects had the financial support of Leukemia & Lymphoma Society (LLS).

Novartis’ Kymriah was given marketing authorization in the European Union (EU) for the treatment of blood cancers, including B-cell acute lymphoblastic leukaemia (ALL) and relapsed or refractory (r/r) diffuse large B-cell lymphoma (DLBCL) after two or more lines of systemic therapy.

Gilead/Kite Therapeutics’ Yescarta was authorized as a treatment for adult patients with relapsed or refractory DLBCL and primary mediastinal large B-cell lymphoma (PMBCL) after two or more lines of systemic therapy.

The Japanese Ministry of Health, Labour and Welfare also approved Novartis’ Kymriah on March 26, 2019, making it the first CAR-T therapy approved within Japan. And, Daiichi Sankyo, the company which controls the Japanese rights to Gilead Sciences’ Yescarta, is seeking regulatory approval for it as well.

To summarize, since the first historic CAR-T approvals in 2017, six CAR-T cell therapies have achieved widespread approvals, including:

Additionally, JW Therapeutics has achieved NMPA approval of Relma-cel (relmacabtagene autoleucel) within China. This is the first CAR-T product independently developed in China and approved as a Category 1 biologics product.

As evidenced by these historic approvals in diverse markets across the globe, CAR-T cell therapy has reached its time in the spotlight and will provide critical contributions to the future of human health.

Do you have questions about the history of CAR-T cell therapy? Ask them in the comments below.