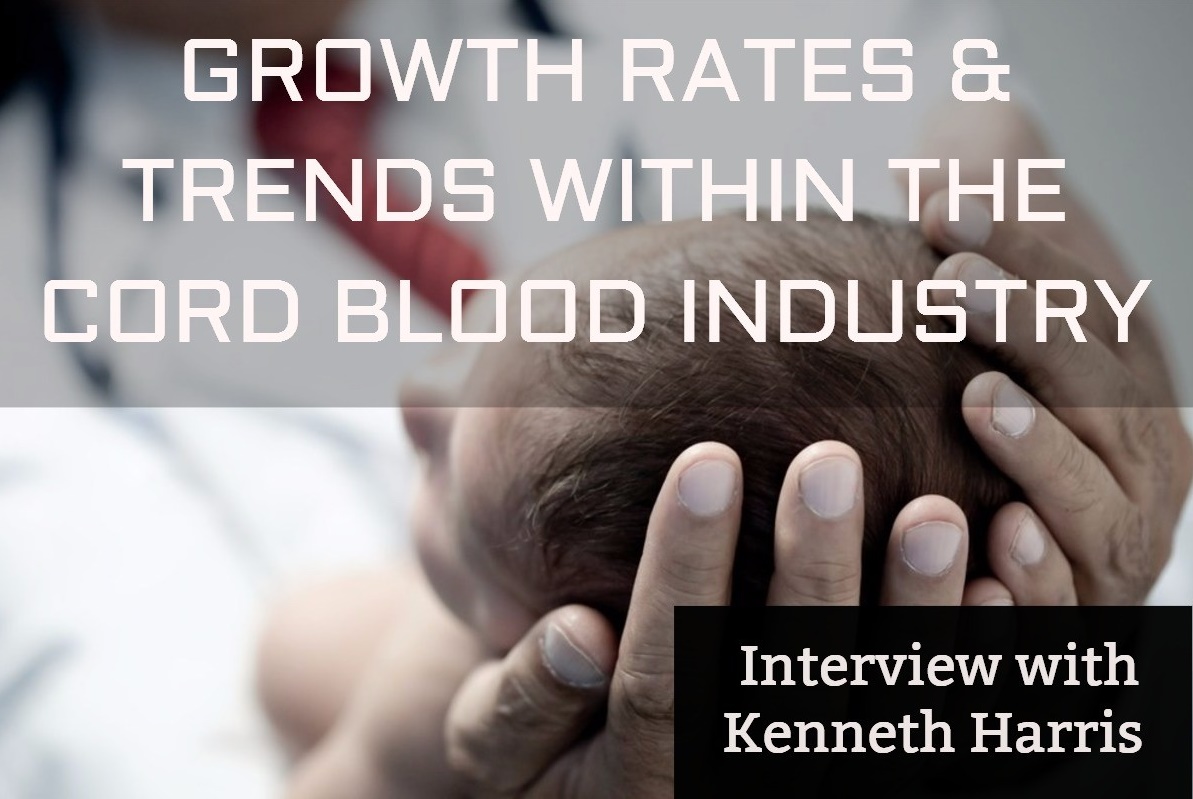 I had the honor of interviewing Kenneth Harris, Chief Advisor for CuraSense Advisors about cord blood industry growth rates and trends. There are many misleading metrics being released about the cord blood banking industry, so it was an honor to speak with another person who is extremely knowledgeable about the cord blood banking field. In this interview, we explore growth rates for the global cord blood industry, key trends affecting the industry, differences in geographic opportunities and more. Enjoy.

Cade Hildreth: What is your background and how did you get involved with cord blood banking?

Kenneth Harris: I am a molecular biologist by formal training, and have been in the biotech space for almost 30 years serving in a C-Level or a Business Unit Chief Executive role for the last 15. Specific to cord blood, I became involved 15 years ago while serving as President of the Biosciences division at Pall Corporation. Pall manufactured/marketed cord blood processing technology under license from Thermogenesis, and following my tenure at Pall I co-founded a regenerative medicine company which owned a private cord blood bank.

We ultimately merged with Thermogenesis forming Cesca Therapeutics in February 2014. Cesca is now the global leader in cord blood processing and banking devices, and I served on their Board and as President until September 2015. I now am the Chief Advisor with CuraSense Advisors, a company focused on advising clients in financing and/or realigning their businesses in the face of the fast changing healthcare landscape.

Cade Hildreth: How has Cesca Therapeutics been a key player within the cord blood market (products, services, patents, etc.)?

Kenneth Harris: Let me start off by saying I am not affiliated with Cesca any longer except as a shareholder. So, any comments offered here are simply mine.

Cesca’s history in the cord blood space goes all the way back to the mid-late 1990’s, when ThermoGenesis’ Founder Phil Coehlo and New York Blood Center’s Dr. Pablo Rubenstein invented and patented the method for concentrating and isolating nucleated cells away from red blood cells and plasma in a fresh cord blood unit. This method included a disposable medical device that allowed the cord blood industry to dramatically reduce the footprint required to cryostore the desired cord blood cells, and also to reduce the undesired complications of having a large volume of red blood cells present when cryofreezing the cord blood.

In 2006, Cesca received the patents for the AutoXpress platform which further revolutionized how cord blood was processed – using fully automated mechanics and interfacing infrared optics that essentially automated the laboratory processing steps in a single device for taking a fresh whole cord blood unit and capturing the desired nucleated cells into a concentrated minaturized bag ready for cryostorage. I would sum it up to say that Cesca Therapeutics owns a significant patent portfolio for the processing of cord blood, and continue to innovate leveraging their ownership of NovoCord, its private cord blood bank in India.

Cade Hildreth: In your experience, what types of metrics do you think should be used for tracking the global cord blood market? Kenneth Harris:  Modeling the cord blood market is like building a spider web. It is more art than science, since there are multiple verticals with varying degrees of overhead, marketing and regulatory costs. One has to consider the complexities of the public allogeneic banking model today supplying both experimental and/or approved cord blood drug products – albeit these banks are still struggling to gain physician adoption in both pediatric and adult transplant in contrast to the sizable private/family autologous banking model, which has negligible transplant history but significant cash flow.

I analyze the industry performance and trends using various inputs depending on the forecast timeline. My approach relies most on public audited reports, and gives little weight to what marketing claims are made by various organizations. Geographical assessment is also tricky since most of the revenue roles up within private companies. My forecast approach uses, among others, the following:

Mid Term Analysis (3-5 Years):  In addition to the reports mentioned above, I also look at trends in clinical trials specific to cord blood/cord tissue derived cells as the therapeutic agent. I personally completely discount trends in scientific publications, as they are likely to give an over-estimation of anticipated adoption – bench to bedside use is realistically 10-15 years, so scientific literature is not that valuable in my models.

Cade Hildreth: What trends have you observed within the cord blood market over the past few years?

Kenneth Harris: Overall, I don’t think the cord blood market is growing even though Asia is doing well. A high level assessment is that North America is flat, Asia is growing double digits, and Europe is declining. My approach is to look at the cord blood market geographically, as well as by sub-segment according to blood units banked, tissue units banked, and clinical units transplanted.

I would summarize the needle moving trends as follows: Cade Hildreth: What are the key differences between autologous versus allogeneic transplant use?

Kenneth Harris:  This is a really important topic, and one the consumer and patient should clearly understand. Obviously, autologous transplant is when the same cells are used to transplant the donor, and allogeneic is using donor cells in another recipient.

Autologous transplant use, the model marketed by many family banks, actually has very limited clinical use thus far. The primary limitations of an autologous transplant are inadequate cell numbers in a cord blood unit per body weight (new guidelines are 2.5 x 107 Total Nucleated Cells per kilogram of body weight) and clinical adoption has been limited to a few blood based cancer indications specifically multiple myeloma (cancer of plasma cells) patients.

Kenneth Harris:  Haploidentical transplants are on the rise in the U.S. and Asia, while becoming an optional standard of care in Europe for hematopoietic stem cell transplant (HSCT). A haplo donor is one which shares one of the two sets of HLA genes – i.e. a parent and some siblings (siblings have 25% chance of sharing one set and 25% have a chance of sharing no set).

This development is having a direct impact on the numbers of prescriptions for cord blood specific to HSCT, and will likely replace its use over the coming 5-7 years.

However, on a positive note, cord blood stem cells may likely prove valuable in regenerative medicine applications outside of blood cancers and genetics disorders.

Cade Hildreth: In your opinion, what other current threats does the cord blood industry face?

Kenneth Harris:  I would say that there are two main threats to the cord blood industry:

(1) the reduced intensity conditioning with haploidentical transplant,
and
(2) the looming economic viability for the public cord blood banks

Cade Hildreth: What actions could cord blood banks take to increase their value per unit?

Kenneth Harris:  The most significant value contributor of a cord blood unit is directly tied to its viable total nucleated cell count. Cord blood banks must improve their programs to ensure a maximum volume of cord blood is collected at the hospital, and minimal cells are lost during processing, cryopreservation, and thawing. I would therefore focus on better systems and training for hospital collections, and significantly improve banking manufacturing processes.

Cord blood banks need to significantly focus on their final total viable cell counts for a thawed cord blood unit – not on the percentage of cell recovery from a milliliter of blood prior to cryopreservation.

They also must invest significantly into research that clinically proves the value of cord blood or cord tissue stem cells.

When a therapeutic company sells a therapy, they have to prove it has equivalency or superiority in a given indication. Cord blood is no exception to this model.


Cade Hildreth: Have you observed any regional differences in cord blood banking, such as areas with higher (lower) than average growth potential? Kenneth Harris:  I highlighted my thoughts on the regional differences in growth rates above. However, specific to overall value of the markets in 2016, the U.S. remains the largest market followed by Asia with Europe trailing significantly behind.

I expect that China and India will each surpass the U.S. market in the next few years for the number of banked units, but China will take the global leadership role in both annual units and market value.

Cade Hildreth: What are your 5-10 year predictions for the cord blood industry?

Kenneth Harris:  I am extremely bullish on the Asia market. Cord blood is a smart insurance policy for regions which have naive unrelated stem cell donor programs, and even more critical in regions with growing rates of diagnosed hematological cancers such as India and China. I predict that China in particular will innovate clinically, and find utility for cord blood cells in the regenerative medicine space, so it further supports a sustainable growing sector.

However, I have concerns that the North American and European markets have choppy waters ahead. The public banks are facing dire financial pressure, and will need to find private partners to survive. The private family banks in the U.S. and EU need to show clinical utility of their cells, or it is likely the market forces will not be kind to them.

Cade Hildreth: To whom would you recommend private cord blood storage?

Kenneth Harris: This is a tough question, and so I will use science and public data as the foundation for the answer. Any expecting parents which one or both are not of western European Caucasian descent should consider banking the baby’s cord blood. I give this recommendation because the likelihood of finding an acceptable HLA matched stem cell donor or cord blood unit via a donor program is approximately 75% if you are Caucasian.

Literature cites non-caucasian patients are disadvantaged in finding a suitable matched donor for a multitude of reasons (e.g. chances are 25% for African Americans, 40% for Asians, 45% for Hispanics, and <5% for Multi-racial patients), so having the security of banked cells for the family seems like a sound investment to me.

Cade Hildreth: How can others get in touch with you or ask you further questions?